On the Question of Homeless Photography The homeless outreach group I work with has established a new policy asking volunteers to not post photos on social media of the homeless people we visit on outreach or their encampments.

It was a tough call.

Photos make homelessness real. A photo of someone carrying a bag lunch back to his encampment in the woods or standing at the side of the outreach bus with a new pair of socks in his hands has an impact on people. Very often, a person who is homeless looks like the guy who stood in front of you at the line at Kwik Trip, just a regular guy, and that is surprising to many. There is no homeless costume, no living on the street get-up. People look all different kinds of ways. So taking and posting photos makes homelessness not only more real but more realistic. It could be you, the photos say. Or me.

That’s something of great value in light of the tremendous stigma attached to living on the street.

The flip side is that the act of taking pictures can have a bit of a safari feel to it.

Oh my God! Did you see that guy perched up on that ledge?

I took a picture of Joe’s tent, he’s the guy who doesn’t come out all winter. There must be twenty blankets in there. Unbelievable.

And what is expressed as genuine amazement or alarm is often the photographer becoming viscerally upset at what they are seeing because what they are seeing is people living their lives outside, making their homes in precarious, dangerous places. So, naturally they want to record that because they want other people to see what they’ve seen and to be as shocked as they are.

I get that but I also get that posting photos gives the photographer a lot of street cred because, you know, there’s an undeniably large bad-ass quotient to doing homeless outreach. Who wouldn’t want their friends to know how bad ass they are? And, of course, being legitimately bad ass requires documentation.

Hey! I was there! Out in the dark and the rain visiting all the homeless folks.

It all comes down to privacy. A person has a right to privacy, a right to not be photographed or to have their home photographed, even if their home is a sleeping bag stuffed in a crevice under a bridge with a steep concrete incline down to a fast-running river, a situation that is so wrong and so frightening that the world ought to know about it. But if telling the world about it means that the authorities come and evict the person from his ledge without any other place to offer him, maybe that’s too big a price to pay to indulge our own shock and discomfort.

Sometimes folks want their story told. They want people to know what led them to living outside. Maybe they want the world to know they have a job but can’t afford rent or that they got injured and can’t work anymore. They have stories to tell about survival and triumph, getting through the winter with their friends, deciding to get treatment for their addiction, or reuniting with kids they haven’t seen for years. Sometimes they want to say thank you. And they’re smiling and they want their pictures taken.

That’s when we get the cameras out. For them, not us. 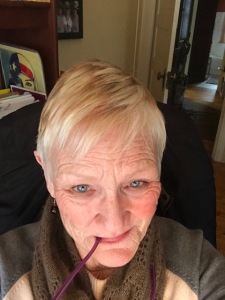